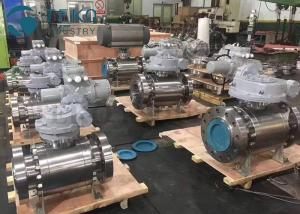 Place of Origin : Made in China

TKEO Cast Trunnion Ball Valve have been designed for severe oil and gas applications, including production, transportation and distribution.

TEKO Cast Trunnion Ball Valve designed the Side-Entry Trunnion-Mounted Ball Valves to assure bi-directional sealing of the valve with two independent floating seats. The design of these seats minimizes the torque required to operate the valve without losing the sealing power. This power is assured by zero differential pressure to the valve’s maximum rated pressure. In addition, these repairable valves are manufactured to seal off both seats at the same time and to allow bleeding of the entrapped cavity pressure (DBB) with the ball in the closed position. The DBB feature allows for verifying that the seats are properly sealing.

What is Trunnion Ball design

As described above, there comes a point where owing to the high value of the loading forces on the ball it becomes no longer possible for the seats to support the ball and an alternative design is required.

An advantage of trunnion ball design over floating ball is the lower operating torque of the ball. This is particularly advantageous when the ball valve is actuated because it reduces the size of the actuator and hence the overall costs of the valve actuation package. Obviously this difference becomes important when the pressure class and valve increases.

Thank you! Your message has been sent to the following suppliers.